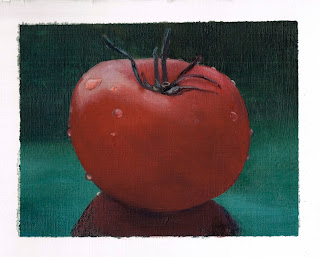 Hi and hello,
Ah, Spring. Trees bursting, the roses bushes already have a bloom or two. Planted the garden and now to wait in anticipation for the first tomato of the season. Yum.
A few weeks ago Graphaids had their annual 40% sale and I had to get over to pick up what never really goes on sale, namely oil paint. Yeah, it goes on sale, but I mean on sale. The good stuff. So I arrived after the huge crowds had descended and left, leaving the place quite picked over and a fellow painter and I start to talk. Next thing I know I'm buying Williamsburg Turkey Umber and Italian Yellow Ochre. I had no intention of buying these colors when I went in, but he proclaimed their virtues and I succumbed. Like shopping when you're hungry. Ok, he was right. They are most interesting. And then also I bought what I intended, Cerulean Blue and Alizarin Crimson. For these last two I opted for Sennelier.  So, like any time you buy something new (earrings, shoes) you have to try them on for size, right? What if they're just not you? So I grabbed some of the paper canvas I had already prepped, taped off the edges, got my pallet in place, squeezed out a dollop of Turkey Umber (OK, nice), squeezed out a dollop of Italian Yellow Ochre (OK, nice), opened the tube of Sennelier Cerulean Blue and SPLOOSH! About two tablespoons of just oil - no pigment - all over the Umber and Ochre. Wow. I promptly went online to wetcanvas.com and got the answer in a snap. Sennelier is made with safflower oil and separates. The word on the street is, "Store them upside down. Should be OK for the long run." Who knew? They did. Now I do and you do too. 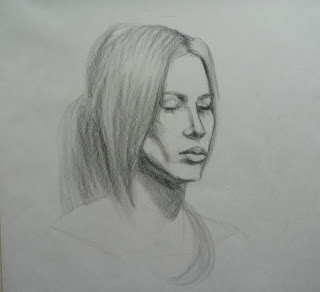 This is from Monday night's drawing class, 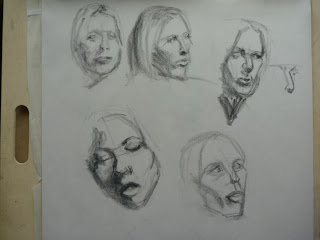 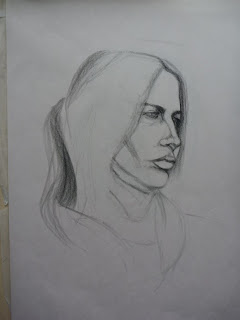 Two twenty minutes (didn't quite come together)
Now a break from class for three weeks. We are going onto perspective.
Vernal equinox (or) enjoy the first day of Spring!
Cheer all! Karen
at 10:32 AM 1 comment:

Every Picture Tells a Story 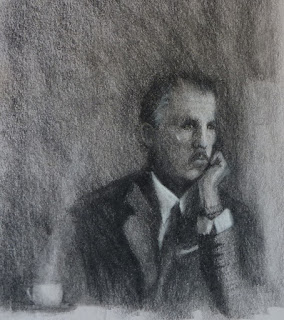 Well I think the cosmic block has moved on for me. If it affected you, I hope its moved on as well or at least that it doesn't hover over your neighborhood. I am full of random thoughts today, trying to reorient myself (I dislike time change to put it mildly.)
Started this little one here by just putting down charcoal strokes and then cutting in with my kneaded eraser. 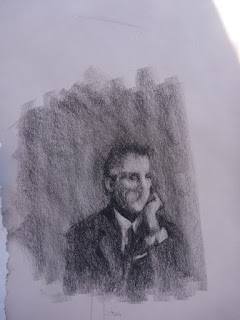 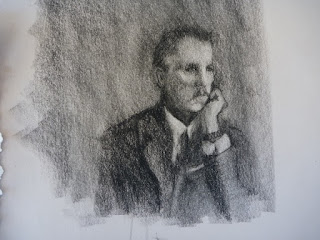 Re-darkened some areas, a bit of white charcoal and felt reinvigorated. Huzzah!
Then on Monday night's drawing class we had a stunning fellow to draw.
Here are my five minutes, 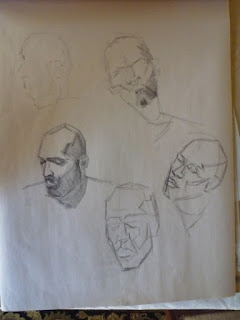 then my first two twenty minutes. 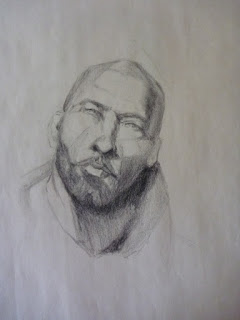 He had piercing ice blue eyes - I mean just crystal ice blue! He would go into his pose and mold his face into this fierce look and if I had been on a bus with him and he stared in my direction with that look, I would have gotten up and moved. Then he'd relax and smile and light up the room. Chris said to mix it up a bit and break out of my comfort zone, so I did a bit along the same as my dapper man at top. 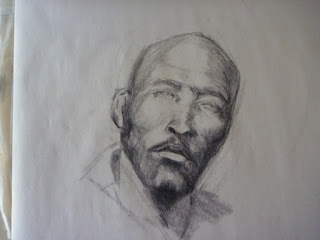 Ok, fun to share. Back to work and then hopefully some painting tonight.
One more thing that gave me a real chuckle. My brother H (his wife calls him that and it so fits him) texted me, saying he had a dream I was married to Brad Pitt and Brad was mean to him. HA! I read it to my husband whose response was "Well, tell him he'll appreciate me a bit more. I'm not mean to him like Brad." The more I thought about it, the more I realized it would depend on which Brad Pitt, the Brad from Meet Joe Black? Well, alrighty then! The Brad from Kalifornia? No thank you!
And have you seen this? Its hysterical!
http://www.nydailynews.com/entertainment/gossip/celebrities-normal-people-gallery-1.1113180?pmSlide=3
Alright, enough of my randomness for one day. Cheers All!
Karen

You can't get there from here 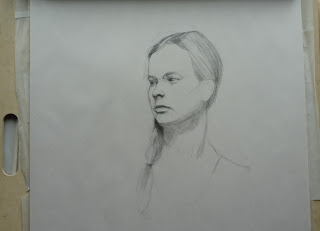 Just like I've read from the blogs of so many of you lately, the end of February and the beginning of March have been jammed packed for me as well. No time for fun - meaning for me drawing or painting. Extra time spent at work is good for the pocketbook, bad for making Art.
So I was especially looking forward to Monday night's drawing class to be able to just concentrate on nothing but. We've been having life drawing with alternating male and female models. This week we had Carson who looked about fourteen and was really about eighteen. She models frequently and really knew how to hold her pose. I hope we use her again. Chris suggested I add a bit to the back of her head, narrow her neck and then gave me a compliment that made my evening, telling me, "There's not much I would correct here." He walked by me three times after that and just nodded. I have to say I had really felt I was capturing her face, but that sealed it. All the cards fell into place for drawing her that night. Next week, who knows? My hand may have a mind of its own.

Ok friends, let's hope this cosmic block moves on to another galaxy. I want to draw! Live long and prosper.
ks
at 3:11 PM 7 comments: